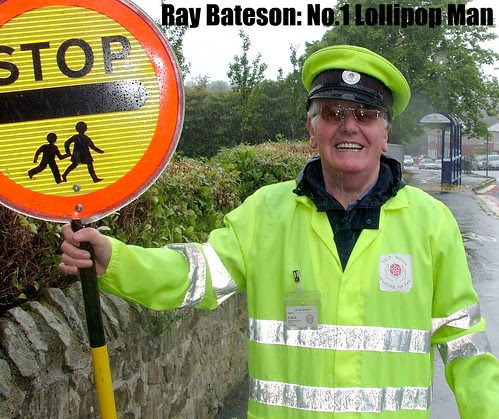 Moorside Primary School's favourite lollipop man, Ray Bateson. Ray will be retiring in October this year unless he can have the age limit of 75 overturned.

To pupils at Moorside, Ray is a constant and much-loved part of their school life. Rain or shine, he gives them a hearty welcome and an enthusiastic goodbye as he guides them across the road at each end of their school day.

News spread fast that Ray will be retiring, and he was showered with gifts on the last day of school yesterday. But it was great to find him on his usual patch again this morning, helping another late-finishing school's pupils safely negotiate traffic on Bowerham Road. It was quieter than usual today without the Moorside kids, but Ray was greeted by nearly every passing motorist and pedestrian as we chatted. He collected another carefully-wrapped present and shared friendly words and waves with all those around him. Even his son swapped some breathless banter as he jogged past in the rain while Ray and I sheltered under a tree!

But don't take my word that Ray is the man I paint him to be. He was voted school crossing patrol of the year by all those who appreciate his efforts and respect him. The following extract is from the Lancashire government newsletter that announced Ray's award (also an article from the Lancaster Guardian with more detail about Ray here):

Lollipop man Ray Bateson of Moorside Primary School, Lancaster, won the award for school crossing patrol of the year. “He got so many nominations from the children and parents,” said one teacher at Moorside. “They all adore him because he’s so cheerful and chatty.” The pupils also wrote their own nominations explaining why they thought Ray should be the winner. One simply said: “We love him!” 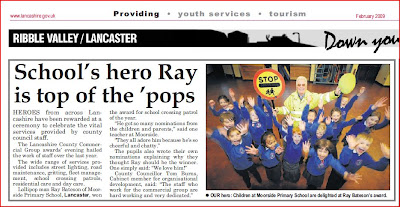