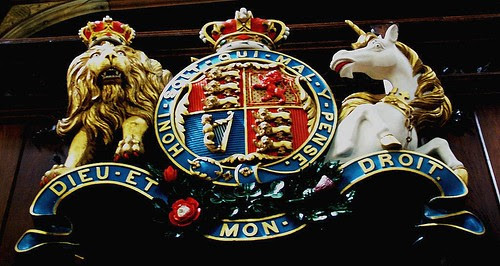 Royal coat of arms on the balcony of Lancaster Priory, looking down on the congregation.

The House of Lancaster was a branch of the English royal family, ruling England for more than 60 years under Henry IV, Henry V and Henry VI. The Duchy of Lancaster still holds large estates in the city (including Lancaster Castle) which provide a primary source of income for the monarch. The current Duke of Lancaster is Queen Elizabeth II.

Translation of the insriptions (more info by clicking on the links):

Posted by eamon@ewmphotography at 11:58 23 comments: 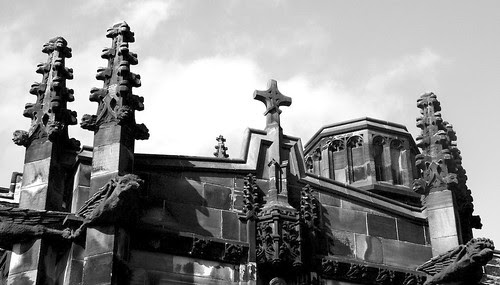 A partial view of the Priory Church of St. Mary, founded in 1094 (earliest written record) and built upon a space where a church had existed from 630 AD. There is much of interest inside and around the Priory, physically and contextually. Expect more pictures and commentary in later posts as I get to know it better. 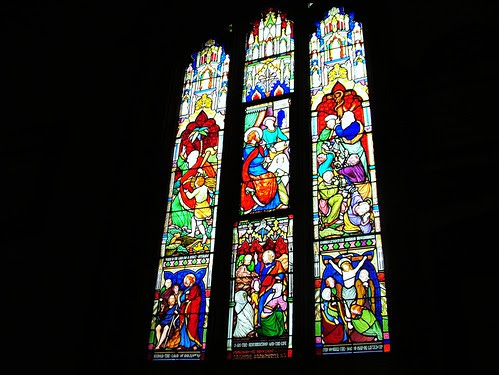 By consulting the church window record, can you tell where this stained glass is located?

Posted by eamon@ewmphotography at 09:41 26 comments: 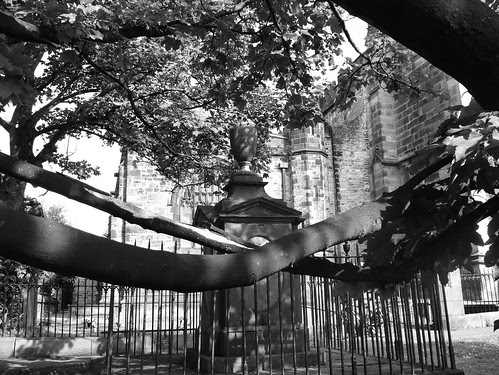 William Lindow was buried in the Rawlinson family grave, pictured above, in the north-west corner of Lancaster Priory churchyard (next to Lancaster Castle). By marrying Abigail Rawlinson, William - a sea captain for the family - joined Lancaster's principal merchant dynasty in the late 18th/early 19th century. (Inscriptions on the grave detailed here - see entry 435 under Rawlinson, Henry).

The Rawlinson family ships were involved in the slave trade, departing from Lancaster to trade slaves between islands in the West Indies and transport the fruits of slave labour. The slave trade's contribution to the fortunes of families like the Lindows and the Rawlinsons is the subject of Melinda Elder's book The Slave Trade and the Economic Development of 18th Century Lancaster

According to Global Links' notes on their Lancaster Slave Trade town Trail , William and Abigail had a black servant - probably a slave - called John Chance who worked at their home in Queen Square. The home that 'John' served now houses a doctor's surgery and can be seen in this photo.

In reference to yesterday's post, it seems likely that William Lindow once owned the land now occupied by that area where his name is prominent on street signs. If you view the street map here, you can see the proximity of Lindow Square / Street to their house on Queen Street. I will verify this when I can.

See a portrait here of Mr and Mrs William Lindow 1772 by George Romney.

THANKS TO: Eric Wilkinson, archivist at Lancaster Castle, for the useful pointers yesterday.

Posted by eamon@ewmphotography at 10:41 8 comments:

So help work this out: Which flat numbers are not in this little compound on Lindow Street, Lancaster? Is it just me or do those squiggly lines* confuse the issue? And please, don't make a snap decision on this one. Look carefully, and then look again. Twice. It may not be infinite, but surely the possibilities expand on each reading?

But there is more to report than squiggly lines and numbers from this photo. Lindow House. Lindow Street. Lindow Square. Who or what was Lindow? An answer with accompanying photos in tomorrow's post.

* Squiggly lines: A linguistic term for lines that squiggle in a squiggly way, usually from left to right but occasionally from top to bottom. [ NB: These are not 'tildes' as Hyde DP reports in the first comment - I think he just invented the term because he was jealous ;) ]

Posted by eamon@ewmphotography at 09:05 16 comments: 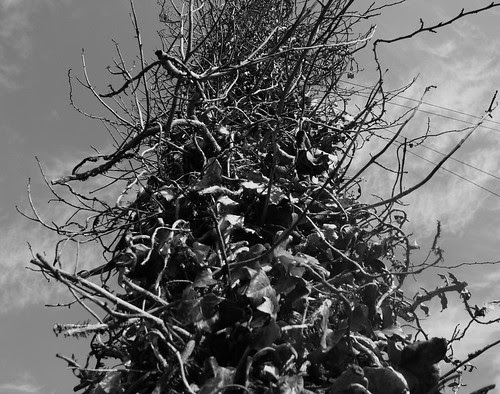 Diminutive Brook Street, a short cluster of houses connecting Dallas Road with Lancaster Canal: A magical place, where motors move in one direction and ivy twists telegraph-poles into trees.

Posted by eamon@ewmphotography at 09:17 42 comments: 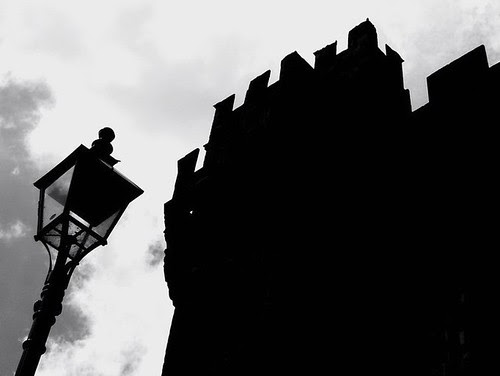 Taken at lunchtime outside Lancaster Castle, which is also a working prison. The prison guards were spread out on the grass in front of the main gate eating lunch while I snapped the castle from different angles (I felt compelled to ask their permission in advance). It took a little while to notice the lamp post, which smacked of an old black and white Sherlock Holmes flick. Perhaps, I thought, he tracked down some of the inmates ... No wait, that can't be right!

Earlier this morning I took this shot of the castle from a distance to give you a view of the whole structure. See also this shot for the lampost and castle in regular perspective.

Lancaster Castle is located in the very centre of the city; as well as performing its function as a prison, it provides tours and even stages theatrical productions. In fact, there is so much to say about the castle that I'll leave you in the hands of the official tour guide. Are you interested in witches? Queens? Penal history? Take a look - the site even allows you to search the convict database. Fascinating stuff. (There is also a quick-read history of the castle in this link to guide to castles of Europe)

Posted by eamon@ewmphotography at 15:39 11 comments: Seeing something above, originally uploaded by Lancaster Today.

Father Stewart indulges in earthly pleasures whilst Bella wonders if there is anything up there. 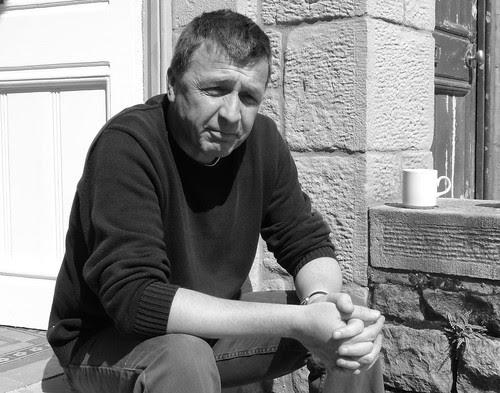 Father Stewart hears my confession: "Bless me father for I have sinned. It has been 25 years since my last confession. Since then I've taken some awful photos and had lewd thoughts. Many lewd thoughts."

"My son," he intoned with deadly seriousness "ditch the camera. It's the work of the devil." 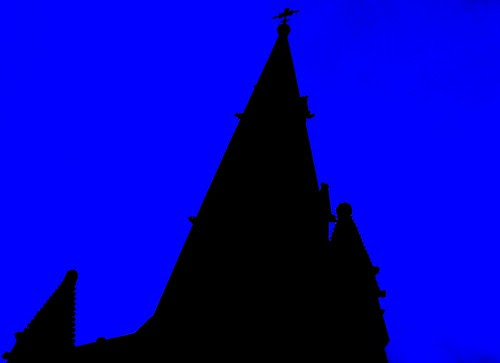 Silhouette of superstition or something serious? Lancaster Cathedral stretches upwards - even Bella couldn't climb this high.

Notes: Sundays remain synonymous with worship within some communities in Lancaster. So when Alan and Alison mentioned yesterday that a friend who is a Catholic priest had stayed over, a theme for today's post began to take shape. Seeing him for the first time chilling out on the doorstep an hour or so later, sleepy-eyed and unpriestlike - if priests have a 'look' -

Posted by eamon@ewmphotography at 09:24 15 comments: