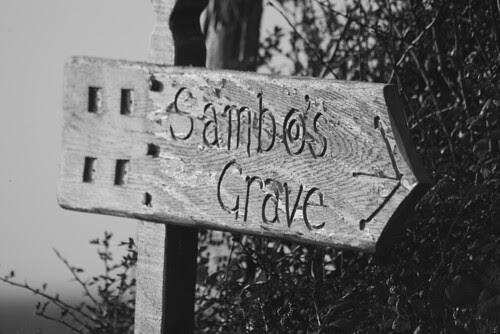 Note: This is the first of three posts in which I'll discuss things I enjoy doing in England. The first is exploring places of historical and political interest close to home. For more ideas on the theme of 'Exploring England', see the Guardian's Enjoy England pages. 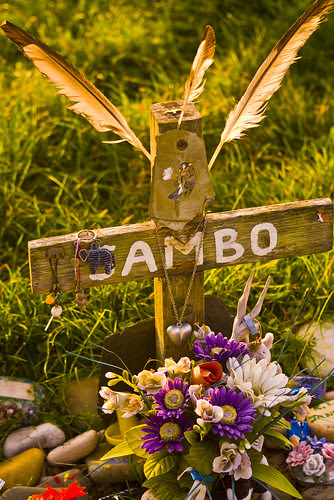 There are often fascinating places on our doorstep which we don't take the time to explore. Perhaps it's because they are so close that we don't make the effort? They are not 'exotic' enough - something like that?

Anyway, I set out to Sunderland Point yesterday to see what it was all about, and, particularly, to visit Sambo's grave. Sambo? Who is Sambo? Surely you've heard of him, educated reader? But just in case you haven't, let me show off my newly-acquired knowledge to save you from your ignorance.

Sambo's grave is a memorial to a young, black slave who is believed to have arrived at the port in Sunderland Point by ship in 1736. He was an African stolen into slavery and first brought to the West Indies before beginning the long journey to Lancaster with his master. Unfortunately for Sambo (as if his life was not tragic enough), shortly after arrival he was taken ill and died near a local inn. Perhaps his immune system was not prepared for the infections carried by the North West Englanders?

Sambo was buried in an unmarked grave, until, in 1795, a certain Rev Watson led an effort to have a memorial erected. It is believed that this teacher penned the following elegy found on the grave:

Full sixty years the angry winter's wave
Has thundering dashed this bleak and barren shore
Since Sambo's head laid in this lonely grave
Lies still and ne'er will hear their turmoil more.
Full many a sandbird chirps upon the sod,
And many a moonlight elfin round him trips
Full many a summer's sunbeam warms the clod
And many a teeming cloud upon him drips.
But still he sleeps - till the awakening sounds,
Of the Archangel's trump new life impart,
Then the Great Judge his approbation founds,
Not on man's colour but his worth of heart.
In the picture below, you'll see that people lay little gifts and stones with messages on them beside the grave. Perhaps it's the overwhelming sense of guilt we should rightly feel that prompts people to pay homage to this single African slave? Or perhaps it's just the love of a sentimental story that pushes these little showings of affection and compassion for a boy who died so long ago. Whatever individual reasons people have for visiting and caring for Sambo's grave, they've prompted my own small scream of indignation into the wind at Sunderland Point.

More tomorrow about the wondrous place that is Sunderland Point. I have much to share about it, but refuse to spoil Sambo's post with such mundaneness tonight. But if you have any interest in reading more about Lancaster's links with the Slave trade, see my previous post on William Lindow.

p.s. Yesterday's post (what are they?) contained a picture of stones on sticks, onto which people have written little messages to Sambo and placed near his memorial. An example I saw there was: You left no footprints but we found you in our hearts. Diane.

Posted by eamon@ewmphotography at 20:21 16 comments: 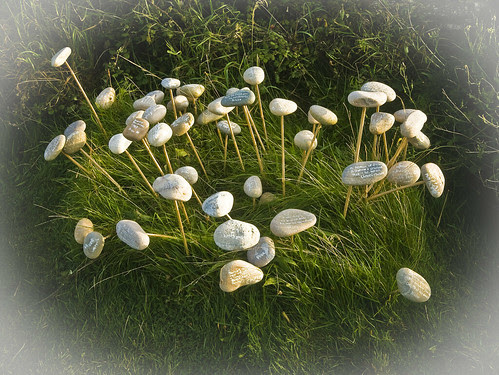 What are they, originally uploaded by Lancaster Today.

Can you guess what these are? The answer along with contextual photos in tomorrow and Sunday's posts. Whoever is closest gets a special prize - and no locals need apply :)

EDIT: See the post immediately after this for the answer.

Posted by eamon@ewmphotography at 21:19 8 comments:

I took this photo back on July 30th, on the same day I shot photos in the tattoo parlour and the fishmongers. Unfortunately, I've lost my notes from that day so forget this young butcher's name. But he works in J. Wilsons in Lancaster Market, and he is good at his job. I've posterised him in photoshop - hope he doesn't mind...

Posted by eamon@ewmphotography at 19:32 7 comments: 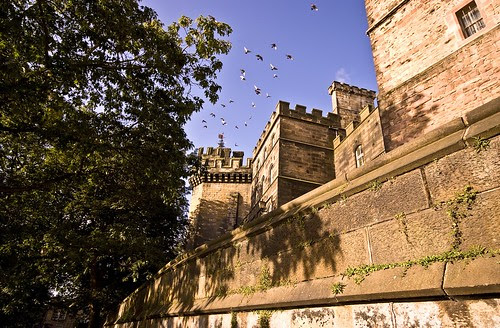 Walking around Lancaster Castle walls, a flock of birds take flight from the main turret.

I shot them in the way all animal lovers do - with my trusty camera.

Posted by eamon@ewmphotography at 20:37 6 comments: 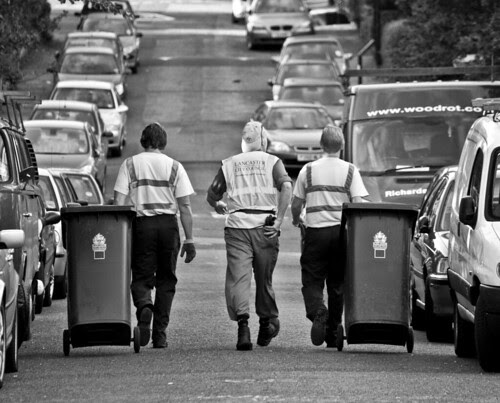 Every Tuesday, the council workers come to clear our street's rubbish. I've watched them work a few times and respect their no-nonsense approach to getting the job done. It looks like a hard graft, but they take their job seriously and do it well, and just like today, most of them are quick to smile and say hello. Good men. 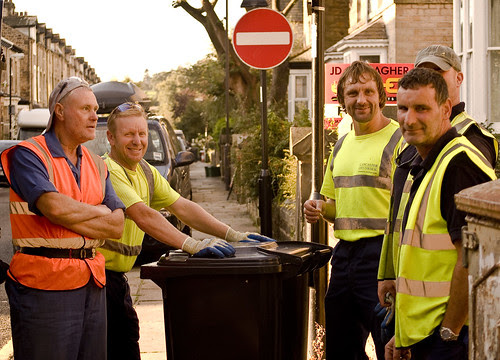 One hiding on Regent Street, originally uploaded by Lancaster Today.

One of the men was a bit loathe to have his photo taken as you can see, but the others were up for it. Many thanks guys!

Posted by eamon@ewmphotography at 19:32 7 comments:

From Keswick to Skiddaw More from yesterday's hike. Do you see Derwent Water? Well, just in front of it you might be able to make out the town of Keswick. That's where we parked and began walking.

So that's where we started from. The next photo is where we went, taken from the halfwayish point. Looking up that path to Skiddaw still makes my legs sing. Yasmin (11) and Caolan (7) did really well on their first real walk - five hours is hard on the legs, especially when you are ... ahem ... a little bit older than that. 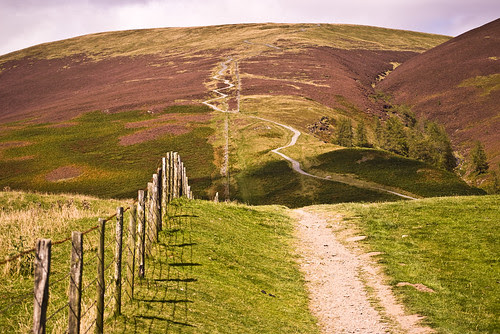 Oh, it hurt. So much so that sometimes you just had to feign interest in an old bit of collasped wall in order to rest your weary legs. "Kids, this wall needs to be photographed while lying on my back. It's a special type of shot that takes ten minutes to process. I would not lie to you." 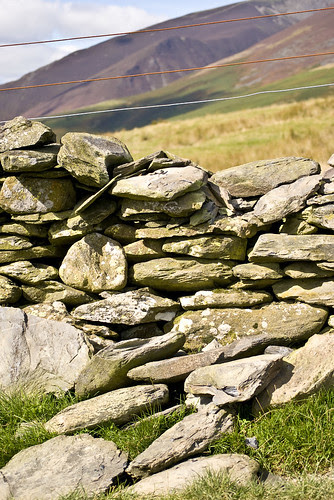 Wall, Lonscale Fell, originally uploaded by Lancaster Today.
Finally, take a look at my flickr account to the right and you'll see yesterday's memorial in all it's phallic glory as well as a handsome bovine family we chatted to along the way (another excuse for a rest).
Posted by eamon@ewmphotography at 16:39 8 comments: 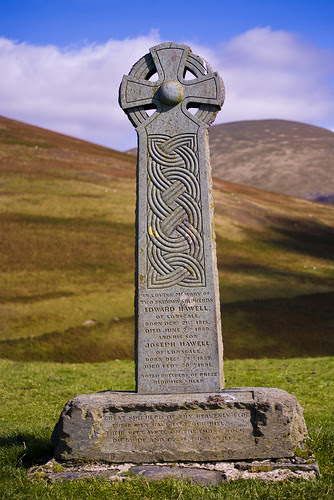 After a long day hiking in the Lake District, I have a set of images for you. Too tired to show them now, so this memorial on Lonscale Fell half way to the summit of Skiddaw will have to do for now. It is dedicated to the shepherding family of Hawell. The inscription opens with "In loving memory of two Skiddaw shepherds." Google for more info if needed!

Posted by eamon@ewmphotography at 21:31 13 comments: